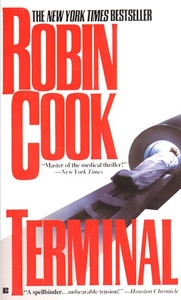 In his new shocker, the master of the medical gothic creates a monstrous cabal—with a chokehold on mankind's dearest hope and darkest fear.

From Coma to Blindsight, Robin Cook's unique blend of cutting-edge technology and timeless horror has always enthralled. But rarely have his dramatic gifts been more effectively deployed than in Terminal.

Despite a blue-collar background and Irish roots mistrustful of fancy degrees, highly motivated, enormously intelligent Sean Murphy has made it as far as his third year in Harvard's combined Ph.D./M.D. program when he makes a fateful decision to take a two-month research elective at the renowned Forbes Cancer Center in Miami. Sean is eager to study firsthand the Forbes Center's remarkable results treating medulloblastoma, a rare form of brain cancer. But his decision is also due, in no small part, to a budding romance with Janet Reardon, a nurse from a privileged and prominent Boston family. Unnerved by Janet's disturbing allure—and even more, by thoughts of commitment—Sean opts for the safety and distance of the prestigious clinic.

But his plans at Forbes go awry from day one. First he is denied the opportunity to work on the medulloblastoma protocol. Then, to his surprise, Janet shows up at the medical center, having accepted a job—ostensibly to further her career but actually to pursue Sean.

When a disgruntled Sean appears on the verge of heading home, Janet persuades him to stay by coming up with a plan: The two of them will investigate the medulloblastoma cases surreptitiously, she taking the clinical and he the research. By the time they uncover the truth about the clinic's seemingly ground-breaking cures, the pair run afoul of the law, their medical colleagues, and—perhaps worst of all—the powerful, enigmatic director of the Forbes Center, Dr. Randolph Mason.

Drawing closer together at every hazardous turn, Sean and Janet discover a horror beyond their worst suspicions, one that would make a mockery of the Hippocratic oath. It is a truth so nefarious it could very well wind them up dead.

Steeped in the latest discoveries of molecular medicine, reflective of the harsh realities of medical economies, Terminal is Robin Cook at his thrilling, thought-provoking best.