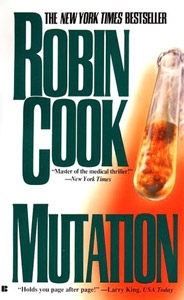 He sought to create the son of his dreams—and invented a nightmare. Robin Cook's new techno-medical thriller probes every father's greatest fear.

Drawing on a horror theme as old as Frankenstein, as fresh as tomorrow's headlines, Mutation is a chilling cautionary tale of the perils of genetic engineering.

When ob/gyn and biomolecular researcher Dr. Victor Frank learns of his wife's infertility, he initiates a bold—and dangerous—experiment. Unbeknownst to everyone, including her, Dr. Frank has adapted the methods of animal husbandry and molecular genetics to human reproduction. Fusing his wife's egg and his own sperm, he sets in motion the production of a superior being, his child.

The result of this experiment, a son, VJ, is born to a surrogate mother and legally adopted by the Franks. To their delight, their son is physically perfect, and by the age of three, displays the complex problem-solving abilities of a prodigy. Victor Frank is a happy man. He has produced a flawless human being, and that success—plus the subsequently healthy births he has covertly engineered through his obstetrics practice—bodes well for a dazzling professional future.

Then, without warning, VJ's intelligence level plunges to a point appropriate to his age, but stabilizes. For the moment, Frank can breathe a sigh of relief: Even if VJ is no longer the genius he was, at least he will be normal.

But that relief is tragically short-lived, for all too soon VJ begins to change again. And this time, there is no cause for comfort—only terror.

Mutation is both the spellbinding chronicle of a father pitted against his son in mythic battle and a timely warning to us all. Here is blue-chip Robin Cook, destined to be as controversial as it is compulsively readable.