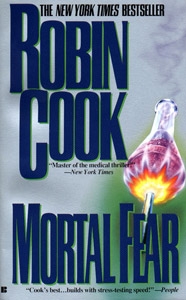 The man who invented medical techno-horror takes you on a startling and chilling odyssey into the origins of life—and death.

When an eminent biomolecular geneticist dies violently before his eyes, a doctor must use more than his medical knowledge to explain what he comes to believe is murder, and to stop a scientific breakthrough from becoming a curse instead of a miracle.

There was a lot that internist Jason Howard didn't know about Dr. Alvin Hayes. But when the scientist met his sudden end, it all came out with a vengeance—for the academically respected geneticist had led a double life, and the private side was damning.

Overcoming his own personal emotional problems, Jason turns his powers of diagnosis to deduction, vowing to solve the mystery no matter who tries to stop him. His search will take him from gleaming modern labs to seamy sex clubs, from Beacon Hill drawing rooms to the wilds of the Pacific Northwest and back, before the pieces of the deadly puzzle fall into place.

By then, Jason has unearthed the scientific breakthrough Hayes was killed to hide—and has himself become the target of a malevolent cabal, bend on using the origins of life to create a hell on earth.

With this disturbing story, DNA research is shown to have a fearful potential, not only through possible mistakes and accidents, but ironically even through success. Splendidly researched and intricately plotted, Mortal Fear is Robin Cook at his prophetic and galvanizing best.