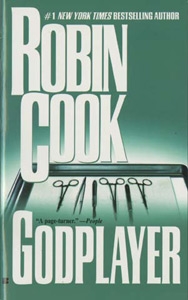 From the consummate master of techno-horror comes a spellbinding novel of medicine gone mad.

It starts as the marriage of true minds—two gifted young physicians burning with the will to heal, soul mates as well as lovers. From that first moment in the medical center when pathology resident Cassandra Cassidy meets brilliant cardiac surgeon Thomas Kingsley, she knows they are meant to be together. Forced by a deteriorating eye condition to switch from her chosen field to psychiatry, Cassandra needs the support and approval the charismatic doctor so passionately offers; and Thomas, privileged only child of banker-industrialist, finds in the beautiful and vulnerable girl the boundless devotion he so desperately requires.

But as Thomas continues his meteoric rise, what should have been fairy-tale happiness begins to disintegrate. Saintly to an adoring public, Thomas is something other to the woman who loves him—an erratic and hostile stranger whose inexplicable rages and bizarre behavior are increasingly disturbing.

As the solidity of Cassandra's marriage begins to crumble, the dependable security of the hospital world around her seems equally menaced: Cassandra is convinced that someone is killing terminal patients—someone who holds the power of life and death in his hands and who wields it like the angel of death.

Against her husband's furious objections, Cassandra takes it upon herself to stop the killings even as she fights to save her marriage. Only after she stumbles onto a terrifying discovery is she forced to realize that her dreams have metamorphosed into nightmares and that her search for the truth has opened the floodgates of unimaginable horror.

Godplayer is Robin Cook's most stunning work to date—a chilling confrontation of personalities in a hospital setting where the innocent too easily become the victims—and a powerful indictment of medicine's tragic inability to police itself.