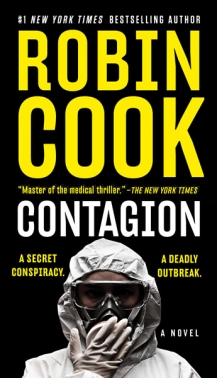 From the undisputed master of the medical thriller comes the story of a deadly epidemic spread not merely by microbes but by sinister sabotage—a terrifying cautionary tale for the millennium as the health care giants collide.

After he loses first his Midwestern ophthalmology practice to a for-profit medical giant and then his family to a commuter airline tragedy, Dr. John Stapleton's life is transformed to ashes. Feeling less the golden boy than a jaded cynic, Stapleton retrains in forensic pathology and relocates to find an uneasy niche for himself in a city that suits his changed perspective: the cold, indifferent, concrete maze of New York.

Stapleton thinks he is past pain and past caring, but as a series of virulent and extremely lethal illnesses—capped by a particularly deadly outbreak of a rare strain of influenza—strikes the young, the old, and the innocent, his suspicions are aroused. When the apparent epicenters of these outbreaks are revealed to be hospitals and clinics controlled by the same for-profit giant that cannibalized his old ophthalmology practice, Stapleton fears he has stumbled upon a diabolic conspiracy of catastrophic proportions: Could the for-profit giant be engaged in the systematic elimination of its more costly subscribers?

Getting at the truth leads to Stapleton's unlikely pairing—both professionally and personally—with Terese Hagen, an art director at a hot Madison Avenue advertising firm. Together they discover that the real explanation behind the killer contagions is even more Machiavellian than could be imagined.

Contagion anticipates some of the uncharted consequences of managed health care, in an age when even the wariest consumer may be at risk. It is Robin Cook at his unerring best.

“Spine-tingling….Who’d have ever thought the peaceful practice of medicine could be so exciting?”—The Denver Post

“The underlying theme—how easily could someone start an epidemic—is answered in a pretty chilling way.”—The Birmingham News