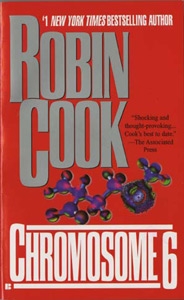 The harrowing new bestseller form the master of medical thrillers, written with the bold strokes of reality that are Robin Cook's trademarks.

When notorious underworld figure Carlo Franconi is gunned down, his Mafioso competitors become prime suspects. Suspicions are fueled when Franconi's body disappears from the city morgue before it can be autopsied—much to the embarrassment of the chief medical examiner and the mayor, but to the amusement of the morgue's resident cynic, forensic pathologist Dr. Jack Stapleton.

A few days later, when the mutilated, unidentifiable body of a "floater" arrives on the autopsy table, Jack is troubled by the case. While unidentified bodies routinely make their way to the medical examiner's office, what piques Jack's curiosity is not so much this body's missing head, hands, and feet, but its missing liver.

Aided by his colleague Dr. Laurie Montgomery, Jack identifies the corpse as the missing Franconi, but this positive identification in no way solves the mystery. Who killed Carlo Franconi? And was the triggerman responsible for the theft of Franconi's body and its eventual mutilation? Jack and Laurie's search for the truth leads them to the steamy jungles of equatorial Africa, where they discover a sinister cabal whose stock-in-trade involves surgical procedures a step beyond the latest in current technology and a Promethean leap beyond accepted medical ethics.

With Robin Cook's signature cutting-edge suspense, Chromosome 6 combines the fast action of a nerve-jangling thriller with the medical possibilities of the all-too-near future.